When you book with an account, you will be able to track your payment status, track the confirmation and you can also rate the tour after you finished the tour.
Sign Up
317

Azerbaijan, the nation and former Soviet republic, is bounded by the Caspian Sea and Caucasus Mountains, which span Asia and Europe. Its capital, Baku, is famed for its medieval walled Inner City. Within the Inner City lies the Palace of the Shirvanshahs, a royal retreat dating to the 15th century, and the centuries-old stone Maiden Tower, which dominates the city skyline. 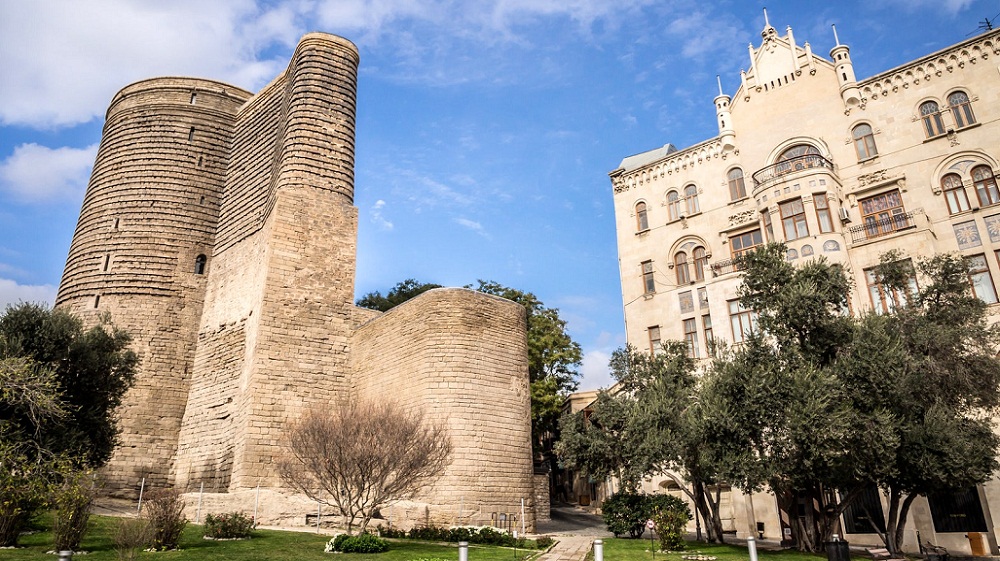 The Maiden Tower is a 12th-century monument in the Old City, Baku, Azerbaijan. Along with the Shirvanshahs’ Palace, dated to the 15th century, it forms a group of historic monuments listed in 2001 under the UNESCO World Heritage List of Historical Monuments as cultural property, Category III. It is one of Azerbaijan’s most distinctive national emblems, and is thus featured on Azeri currency notes and official letterheads. The Maiden Tower houses a museum, which presents the story of historic evolution of the Baku city. It also has a gift shop. The view from the roof takes in the alleys and minarets of the Old City, the Baku Boulevard, the De Gaulle house and a wide vista of the Baku Bay. In recent years, the brazier on the top has been lit during the nights of the Novruz festival. Baku’s Maiden Tower is a legendary place and world-famous landmark in Baku, Republic of Azerbaijan. The Tower is covered by cloud of mysteries and legends which are rooted to the History of Azerbaijan and national Culture of Azerbaijan. The pool of tower’s epics and legends is a part of Azerbaijan’s culture and national heritage. 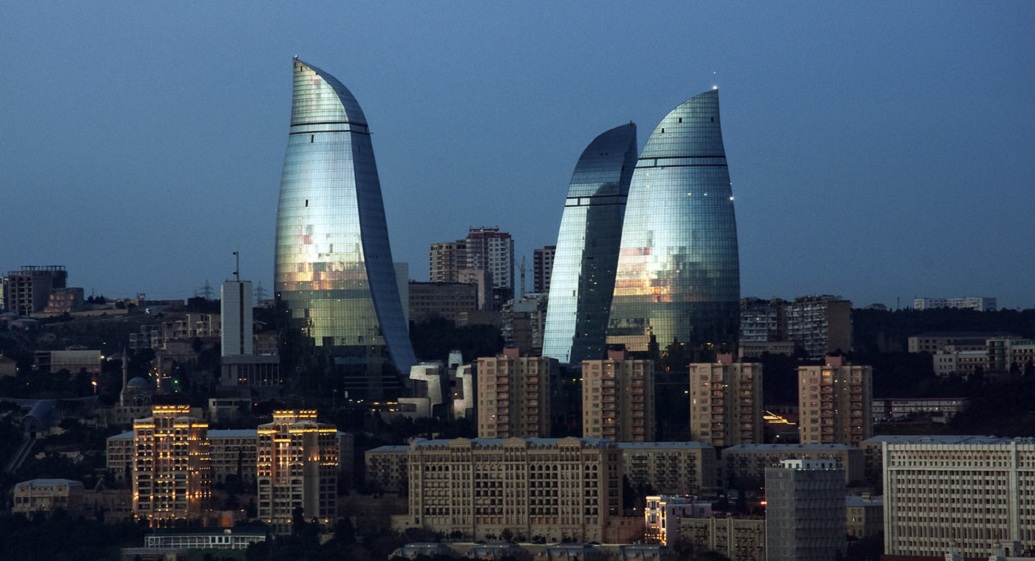 Flame Towers is a trio of skyscrapers in Baku, Azerbaijan, the height of the tallest tower is 182 m. Towers representing flames symbolize fire. The buildings consist of 130 residential apartments over 33 floors, a Fairmont hotel tower that consists of 250 rooms and 61 serviced apartments, and office blocks that provides a net 33,114 square meters of office space. The cost of Flame Towers was an estimated US$350 million. Construction began in 2007, with completion in 2012. HOK was the architect for the project, DIA Holdings served as the design-build contractor, and Hill International provided project management. The Flame Towers consist of three buildings: South, East and West. The facades of the three Flame Towers function as large display screens with the use of more than 10,000 high-power LED luminaires, supplied by the Osram subsidiary Traxon Technologies and Vetas Electric Lighting. On June 2014 Lamborghini opened its first branch in Azerbaijan, located on the ground floor of the East tower of the Flame Towers 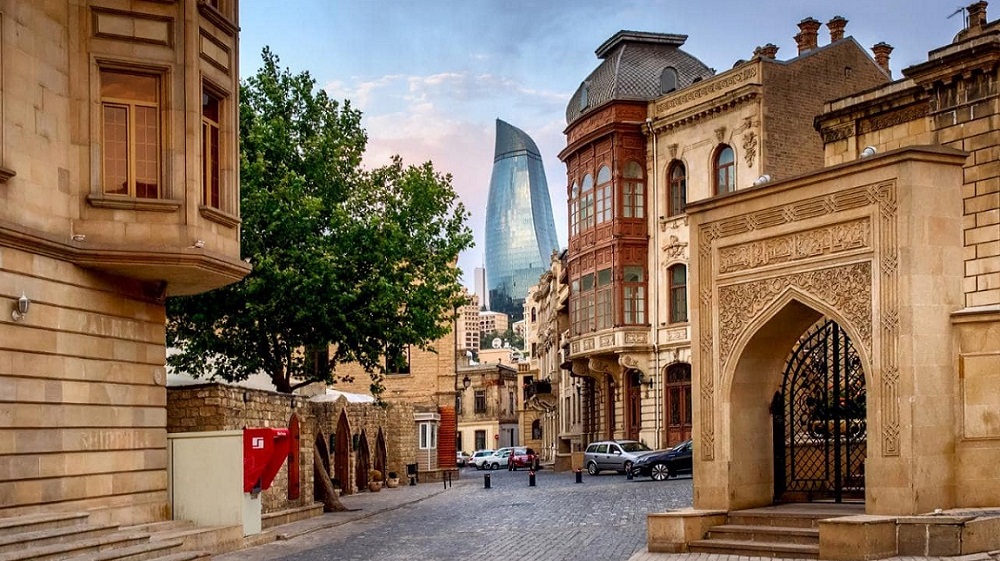 Old City or Inner City is the historical core of Baku, the capital of Azerbaijan. The Old City is the most ancient part of Baku, which is surrounded by walls which were easily defended. In 2007, the Old City had a population of about 3000 people. In December 2000, the Old City of Baku, including the Palace of the Shirvanshahs and Maiden Tower, became the first location in Azerbaijan to be classified as a World Heritage Site by UNESCO. 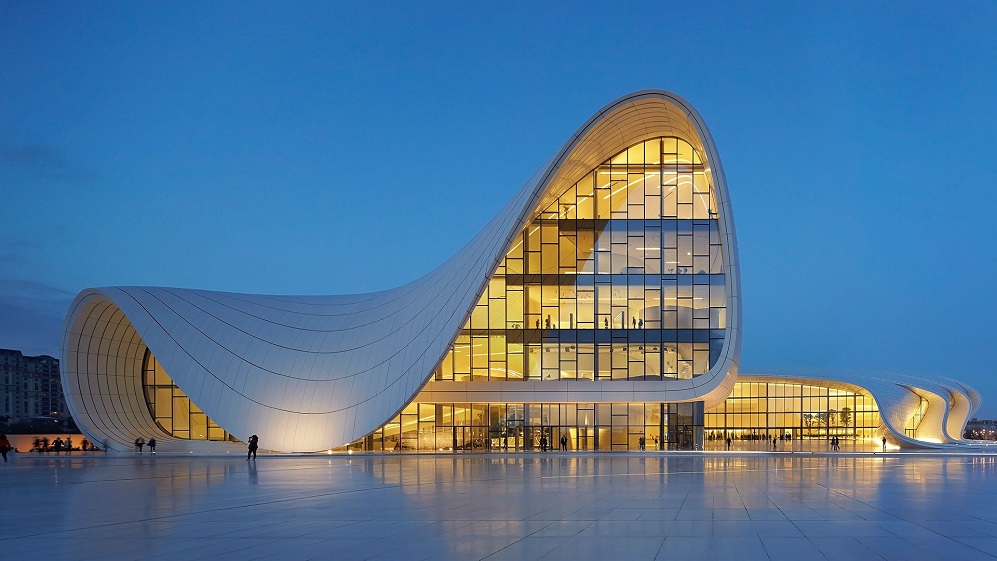 The Heydar Aliyev Center is a 57,500 m² building complex in Baku, Azerbaijan designed by Iraqi-British architect Zaha Hadid and noted for its distinctive architecture and flowing, curved style that eschews sharp angles. The center is named after Heydar Aliyev, the first secretary of Soviet Azerbaijan from 1969 to 1982, and president of Azerbaijan Republic from October 1993 to October 2003 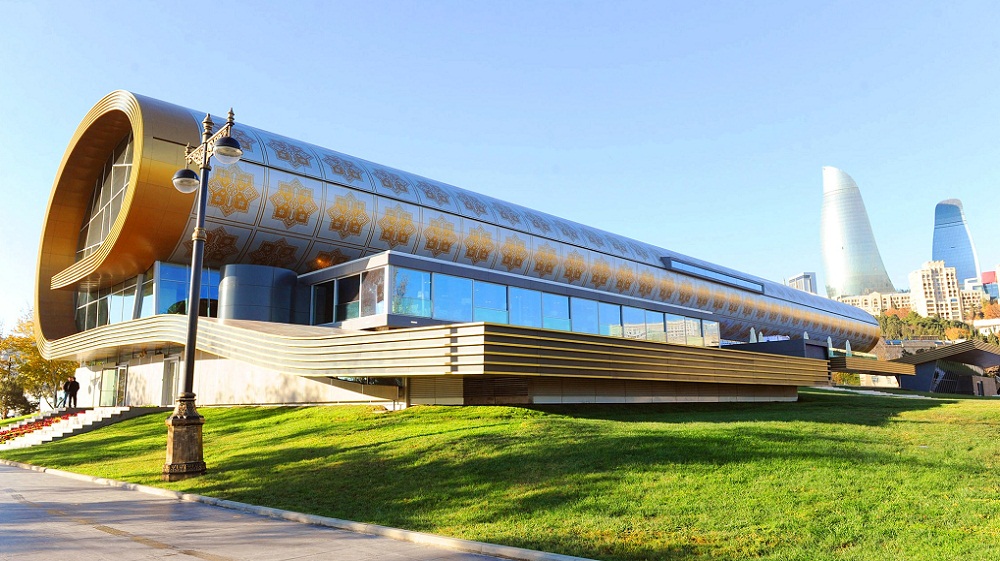 This ornate 1762 palace building features vivid murals and dazzling coloured light streaming through şəbəkə (stained-glass windows), making it Şəki’s foremost sight and one of the South Caucasus’ most iconic buildings. It was originally the Şəki Khan’s administrative building, just one of around 40 now-lost royal structures within the fortress compound. You don’t have to pay the entrance fee to enter the walled rose garden in which the palace is set behind two huge plane trees, planted in 1530. The facade combines silvered stalactite vaulting with strong geometric patterns in dark blue, turquoise and ochre. The petite interior is only one room deep, but lavished with intricate designs. Most are floral but in the central upper chamber you’ll find heroic scenes of Haci Çələbi’s 1743 battle with Persian emperor Nader Shah complete with requisite swords, guns and severed heads. No photos are allowed inside. 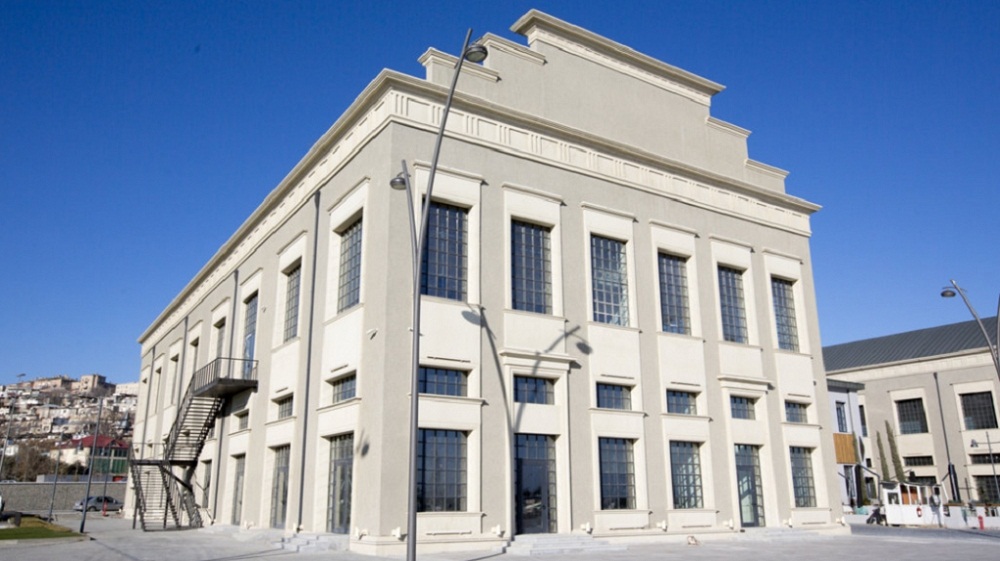 Yarat means ‘create’, a spirit that’s in ample evidence in this centre’s many thought-provoking installations that don’t shy away from sociopolitical commentary. Even the cafe is inspired, set around a repurposed metal-press rescued as part of the revamping of this former naval-factory building.  Well worth the journey to 3.5km south of Azneft Sq, it’s part of an extensively regenerated public space between Flag Sq and the sleek Aquatics Centre. Access is easiest by bicycle along Yeni Bulvar. By public transport hop on bus 5 from the train station, Sahil Metro, or Azneft Sq, alight at Səbail meydanı and cross beneath the Salyan Hwy using the underpass. 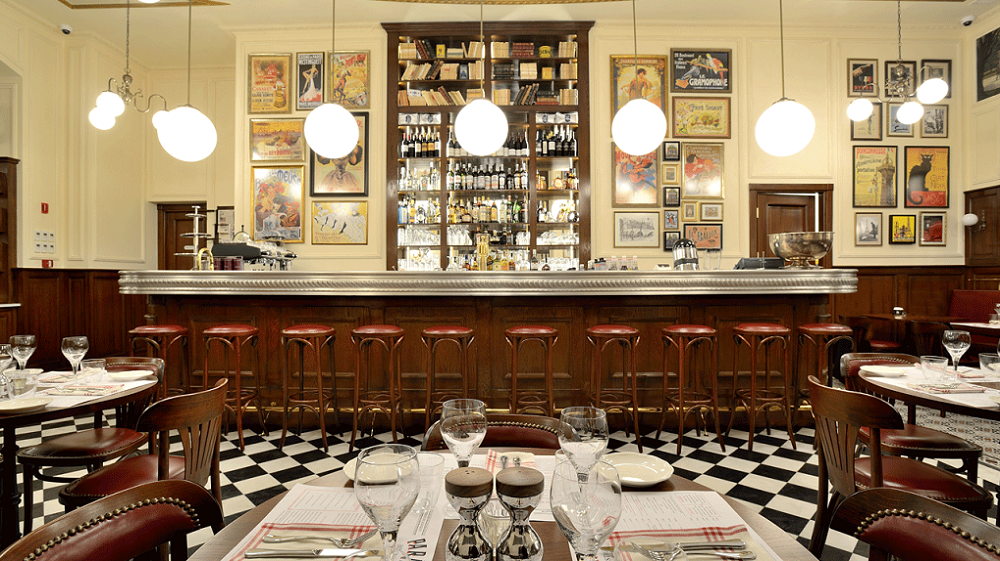 It’s hard to believe you’re more than a few metres from the Champs-Élysées in this perfectly pitched French masterpiece. It hits all the right Parisian notes down to the plane trees which curve out from an appealing park-facing street terrace. Waiters in claret aprons busy themselves delivering garlic escargots, duck breast with tapenade or flaming crème brûlée.  Good wine list and Blanche de Bruxelles white-beer on tap. There’s a reduced menu after 11pm but drinks and snacks anytime. And yes, there’s eggs Benedict for breakfast (AZN8). 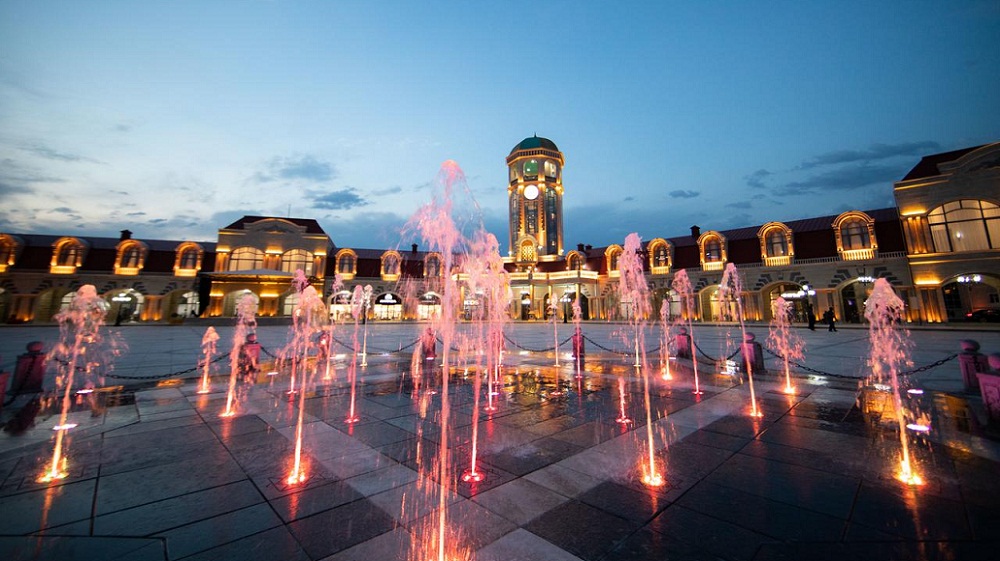 Brand new in 2019, this multi-restaurant complex is ranged around a large stone courtyard featuring central fountains and the photogenic mechanical clocktower for which it is named. Within shady arcades are all of Naxçivan’s top international eateries, with cuisines including Turkish-Anatolian, at Köşebaşı; upmarket east-Asian, at Jasmine; and Georgian, at Batum.

Palace of the Shirvanshahs 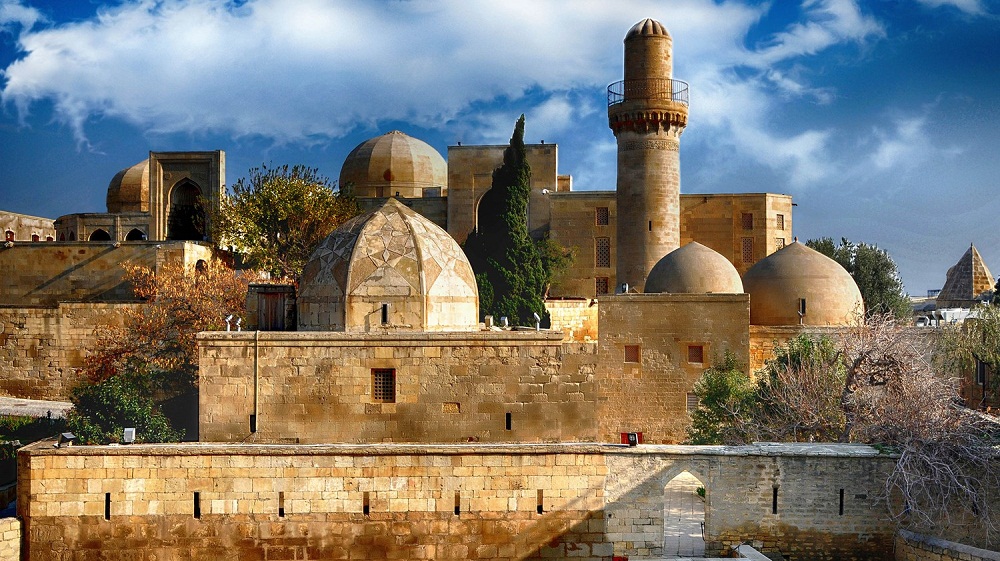 This splendid confection of sandstone walls and domes was the seat of northeastern Azerbaijan’s ruling dynasty during the Middle Ages. Mostly 15th century, it was painstakingly (over)restored in 2003 with artefacts adding interest plus one or two entertaining audiovisual surprises.  Enter via the main ceremonial courtyard. A small gateway on the left leads into the courtyard of the 1428 Divanxanə, an open-sided, octagonal rotunda where Shirvanshah Khalilullah I once assembled his court: a decidedly small court it would seem, judging from the structure’s diminutive size. To see the whole palace complex without paying for entrance, buy a drink on the rooftop at Floors or climb to the ‘secret’ rooftop of the Artım art space. 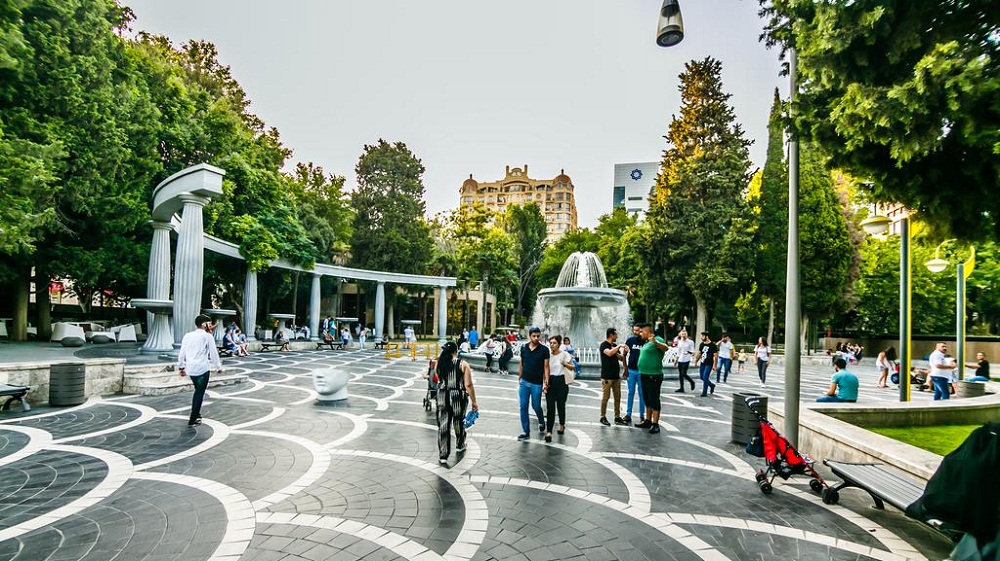 Ever-popular with strollers, this leafy piazza forms Central Baku’s natural focus. The fountains for which it is named include one topped by shiny silvered spheres giving fish-eye reflections of the trees and stone facades. Don’t miss the beautiful statue-inlayed facade of the Nizami Literature Museum, best photographed at night. And outside the large McDonald’s notice the bronze statue of a young lady with umbrella, bare midriff and mobile phone. Very Baku.