When you book with an account, you will be able to track your payment status, track the confirmation and you can also rate the tour after you finished the tour.
Sign Up
346

On arrival at airport you will be met and transferred to the hotel by our local representative.

After the short rest you will visit the impressive colourful Khmer-style royal palace complex build in 1866 by the Predecessors of King Norodom. Nearby is Silver pagoda (the emerald Buddha temple), where contain plenty of Buddha Statues decorated and made by gold, diamond, gemstone and silver. We will stop at Independence monument and explore the National museum; a beautiful Khmer architecture building contains more than 5000 art antiques made by bronze, wood, gold, silver, copper, sandstone and others. We pass through the river-front park where 4 rivers met at a junction include mystical Mekong. Walk up to sacred hill Phnom Daun Penh – also the name of a pagoda and name of the capital nowadays. Last visit Central Market, a large market constructed in 1937 in the shape of a dome with four arms branching out into vast hallways with countless stalls of goods. Initial design and layouts are from French architect Louis Chauchon. Overnight at the hotel in Phnom Penh.

This morning you will visit Tuol Sleng prison now is Genocide Museum, the most secret part of the Khmer Rouge regime. It’s also called S-21 (abbreviated for Security Office 21), a Khmer Rouge’s premier security camp, specifically designed for the interrogation and extermination of anti-Angkor elements. Leave the relics of the bad history of Cambodia we will go shopping around Russian market, enjoy the bustling daily activities of the locals .Heading to AIRPORT/BUS STATION for departure to Siem Reap.

Welcome to Cambodia – Siem Reap, the treasures of the Kingdom of Cambodia. After the short rest you will transfer to hotel for checking-in. Overnight at the hotel in Siem Reap.

Today you will explore South Gate of Angkor Thom known as Big Angkor, 3km2 walled and moated royal city and was the last capital of the Angkorian Empire, the famous Bayon Temple was an architectural muddle, in part because it was constructed in a somewhat piecemeal fashion for over a century. Terrace of the Elephants is an impressive, two and a half meter tall, 300-meter-long terrace wall adorned with carved elephants and gradual that spans the heart of Angkor Thom in front of Baphuon – huge temple mountain in the heart of Angkor Thom, Royal Palace Area and Phimeanakas – impressive rite and sandstone pyramid. Terrace of the Leper King is at the north end of the Terrace of the Elephants, a double terrace wall with deeply carved nag as, demons and other mythological beings.
Afternoon visit Angkor Wat temple, the founder of the temple was Suryavarman II who reined Cambodia from 1113 to 1152 and built the five towers in the 12th century to dedicate to the Hindu God Vishnu. The plan of the pyramidal conception of the temple combined with spaces, alleys, ditches is an ancient masterpiece of architectural design and construction. Have funny time at bars and pubs at Angkor night market. Overnight at the hotel in Siem Reap.

Today you will visit Small Circuit including: visit Ta Prohm temple which is a wonderful combination of human genius and natural beauty. Giant trees have grown here for centuries and Prasat Kravan was originally constructed by noblemen rather than a king. Banteay Kdei was built in sandstone, which has deteriorated quite badly. However, there remain some very beautiful lintels and pediments. Srah Srang is a royal pool was the King’s bathing pond, where he washed with his many concubines each day. Takeo – King Suryavarman I commissioned this temple in the 10th Century, but it was never completed so has no elaborate decoration like its contemporaries. It is a pyramid on 5 levels and is dedicated to Shiva. Thommanon – small attractive temple in very good condition, built at the same time as Angkor Wat. Chau Say Tevoda built during the second quarter of the 12th century opposite of Thommanon, it was dedicated to Shiva and Vishnu.

Afternoon overland trip to visit the highlights of the Grand Circuit including: Preah Khan – meaning The Sacred Sword, this temple was also built by Jayawarman VII and is famous for its immensely long cruciform corridors and delicate carvings. Neak Pean – This temple is a delicate highlight of Khmer art. Built by Jayavarman VII, this temple is the perfect representation of the heavens on earth. Ta Som was a small classic Bayon style monastic complex consisting of a relatively flat enclosure. East Mebon was built in the 10th Century by Rajendravarman; this temple was situated on a small island in the middle of the Oriental, or Eastern, Baray. Last visit Pre Rup was built in the 10th Century by Rajendravarman and view lovely sunset there. Overnight at the hotel in Siem Reap

This morning visit to Wat Thmei (Killing Field) contains a unique glass-walled stupa containing the bones of victims of the Khmer Rouge. Some of the bones were recovered from a nearby well while others are the remains of soldiers who died on a nearby battlefield. Come back to visit the “Les Artisans d’Angkor – Chantiers Ecole” the Finest Authentic Khmer Arts and Crafts.

Afternoon visit Floating Villages, located 10 kilometers south of Siem Reap! Take a ride in a traditional wooden boat on the Tonle Sap, the “Great Lake” of Cambodia and the largest in Asia. Here you’ll see plenty of examples of the Khmer way of life on the Tonle Sap. Then visit Wat Bo founded in the 18th century, a highly respected pagoda contains very unique wall paintings of the Reamker (Ramayana) that are said to be late 19th century and Local Market. Overnight at the hotel in Siem Reap.

This morning you will be transfer to airport for your flight back home or your next destination. On the way if there is time we will visit Puok, the real and original place of the Artisans d’Angkor silk, where you will see the full process of silk producing, from the silk worms munch on the Mulberry leaves to spin their cocoons which used to make silk warp. You of course will see the weaving work and purchase the high quality silk products as a beautiful Cambodia souvenir. 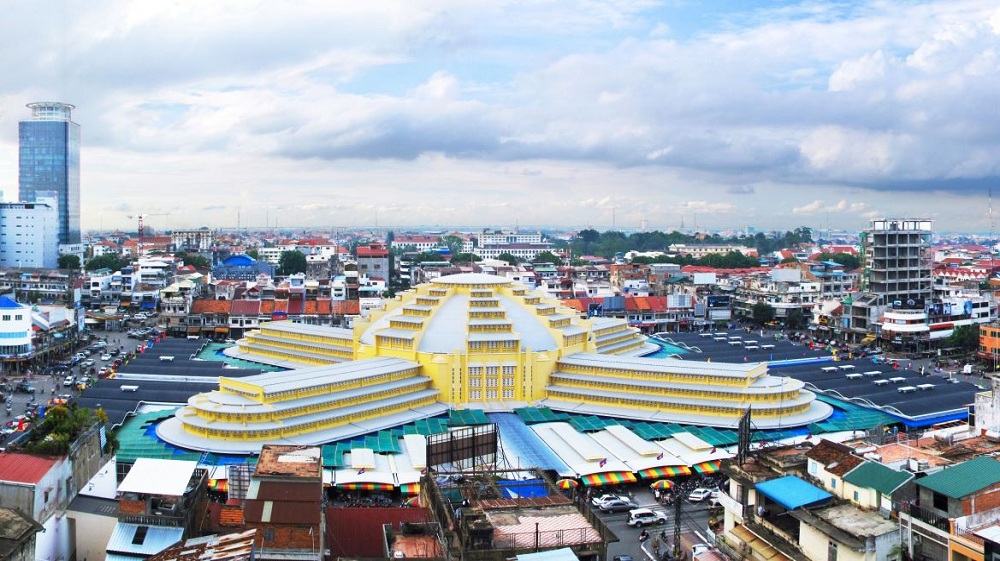 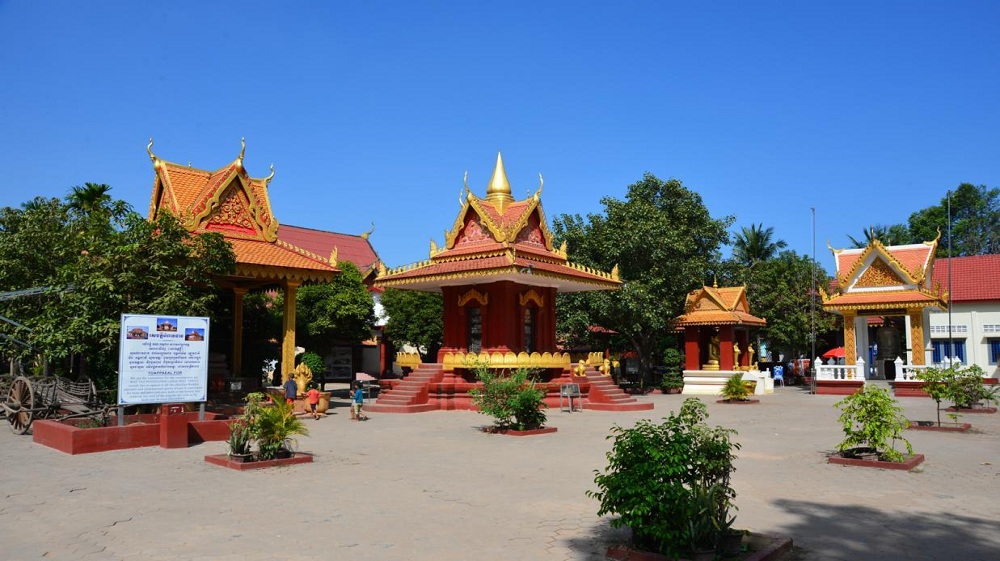 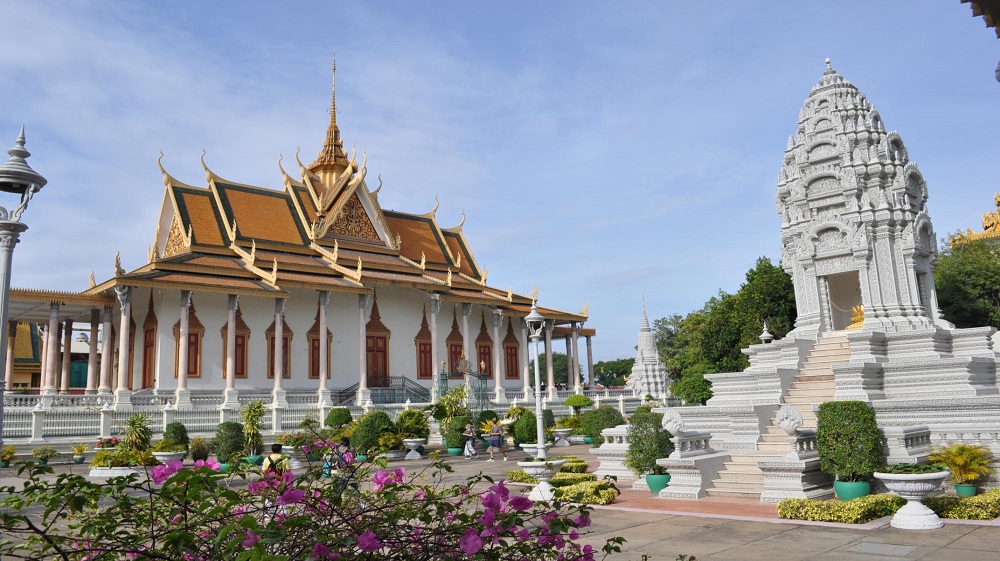 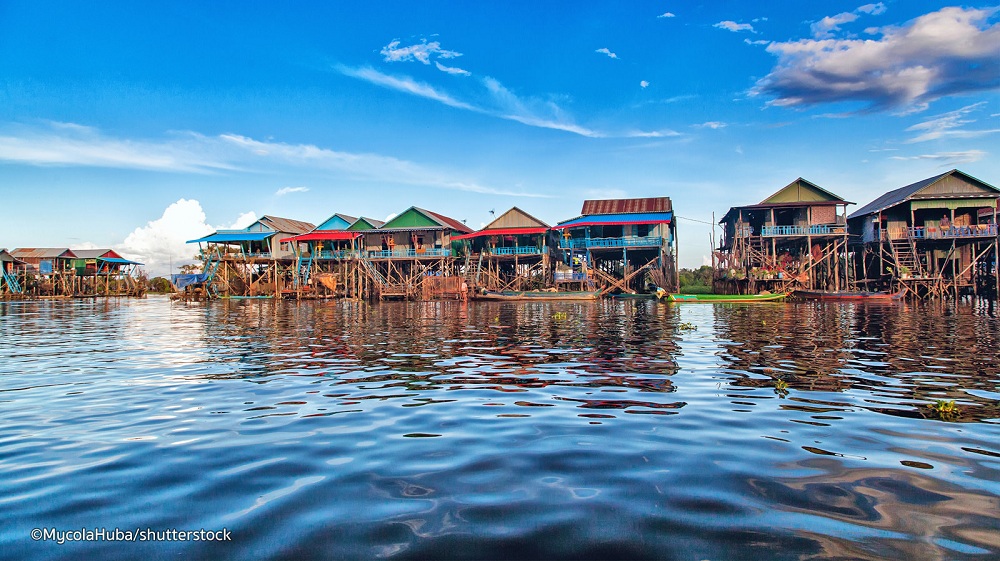 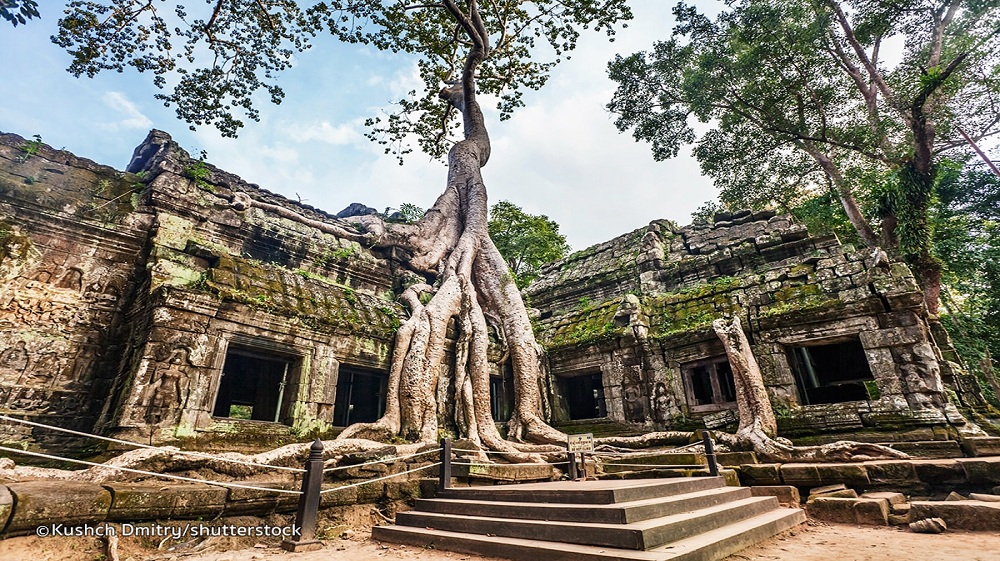 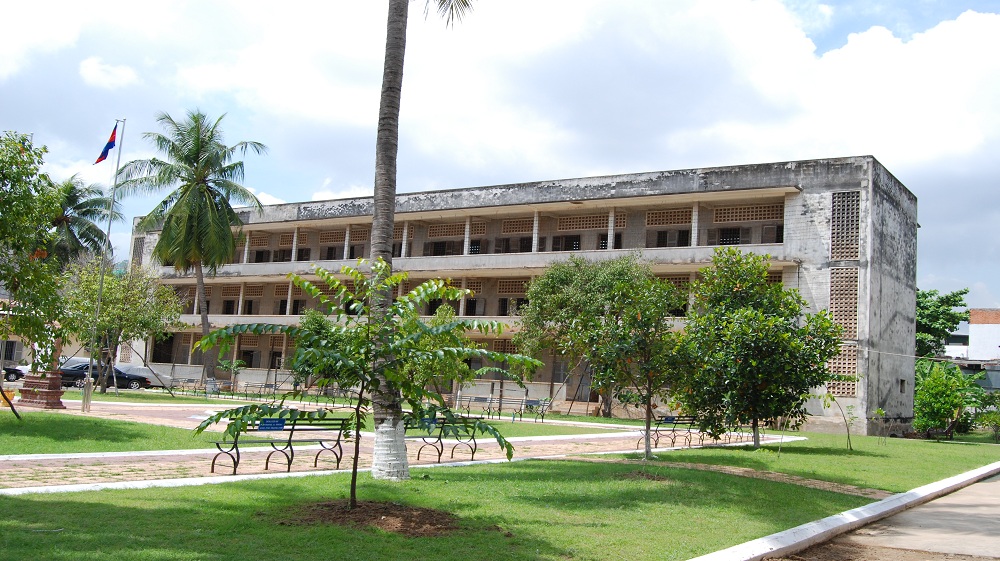 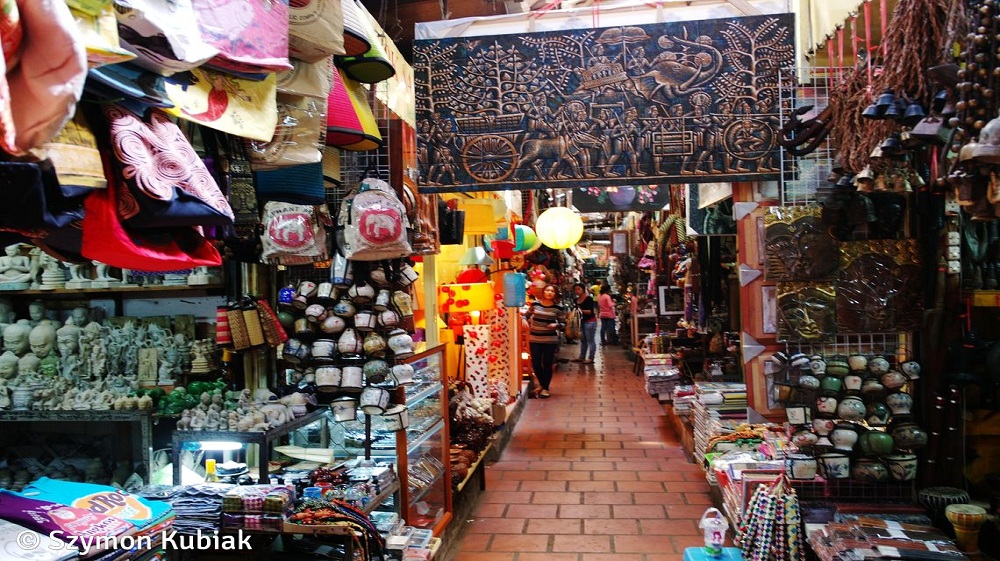 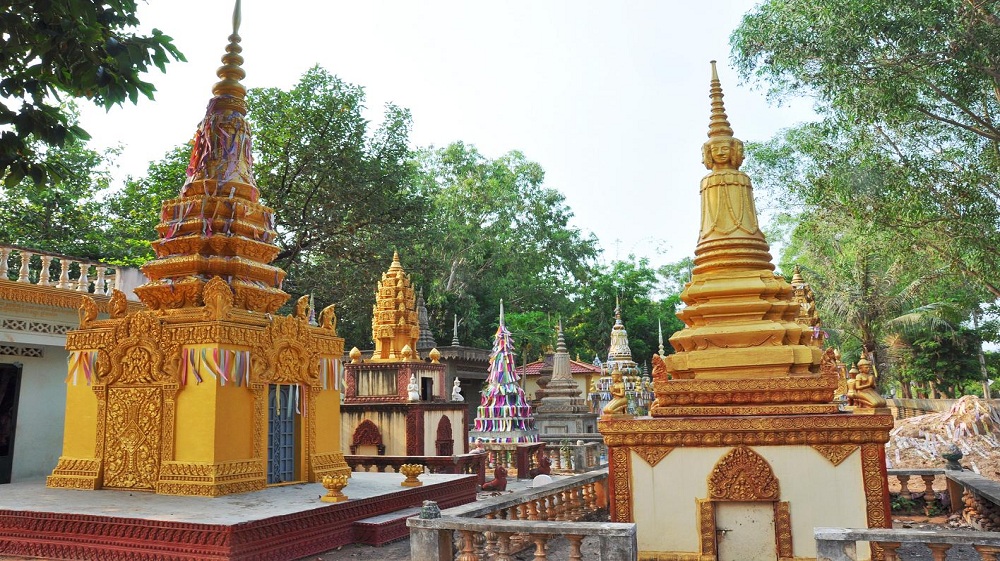 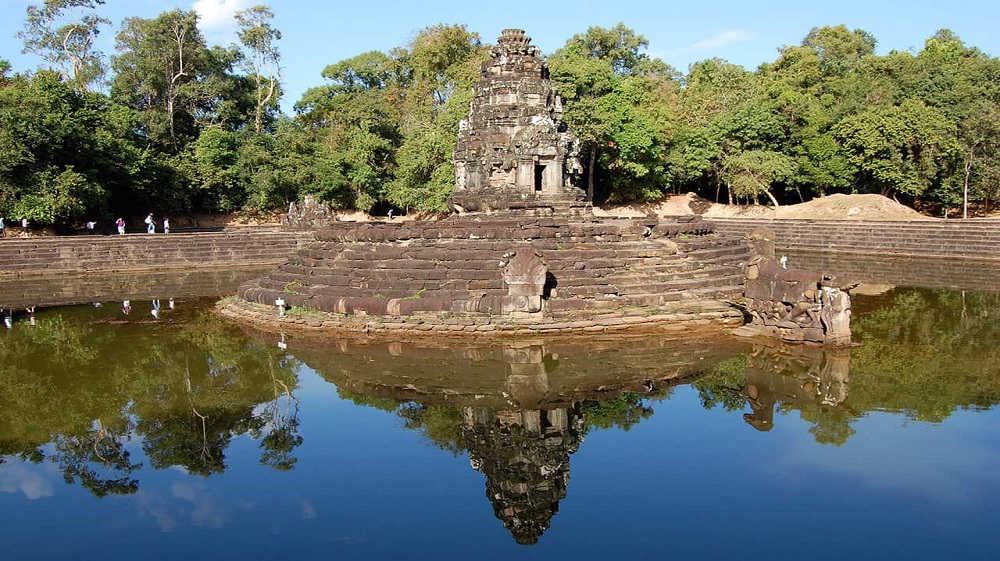 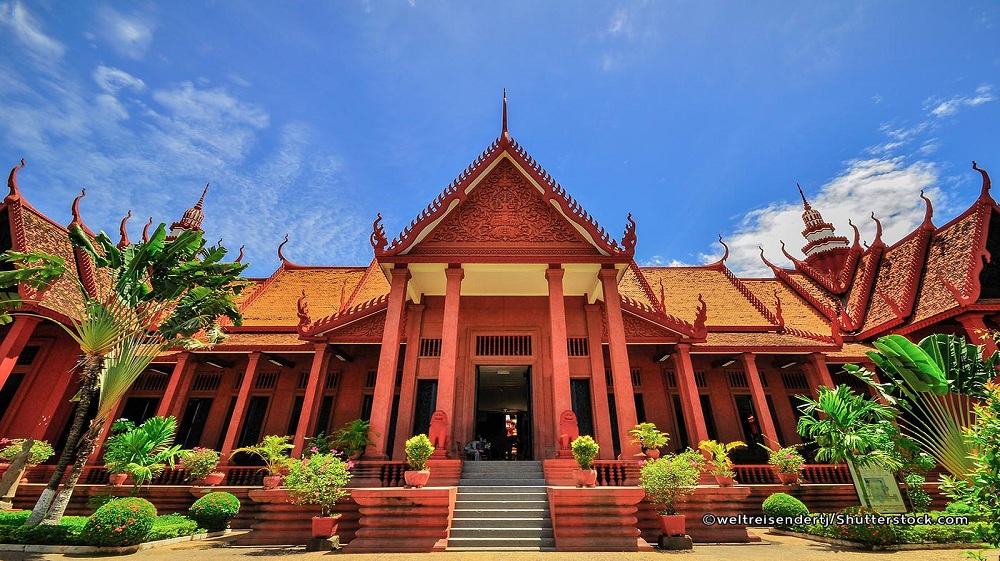 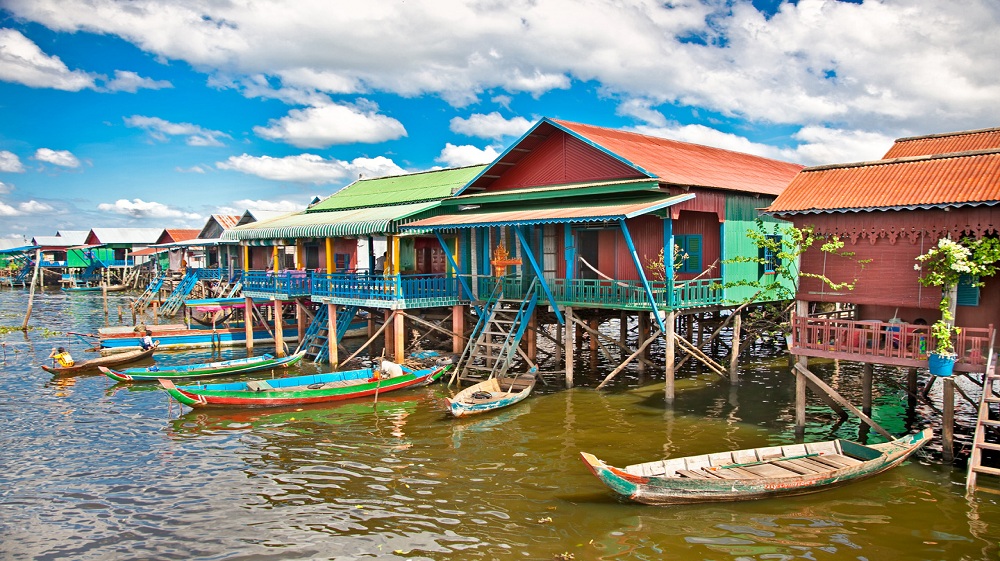 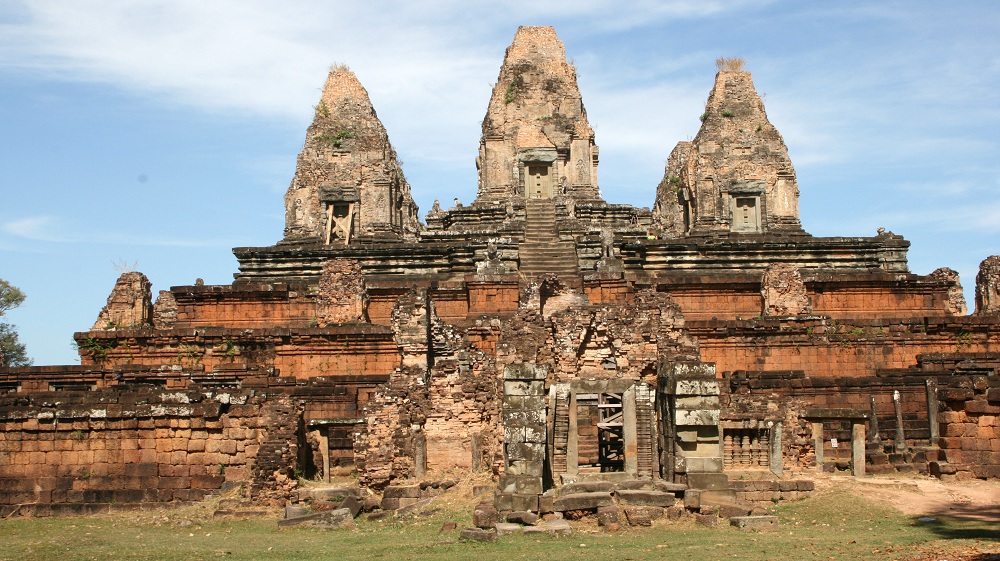 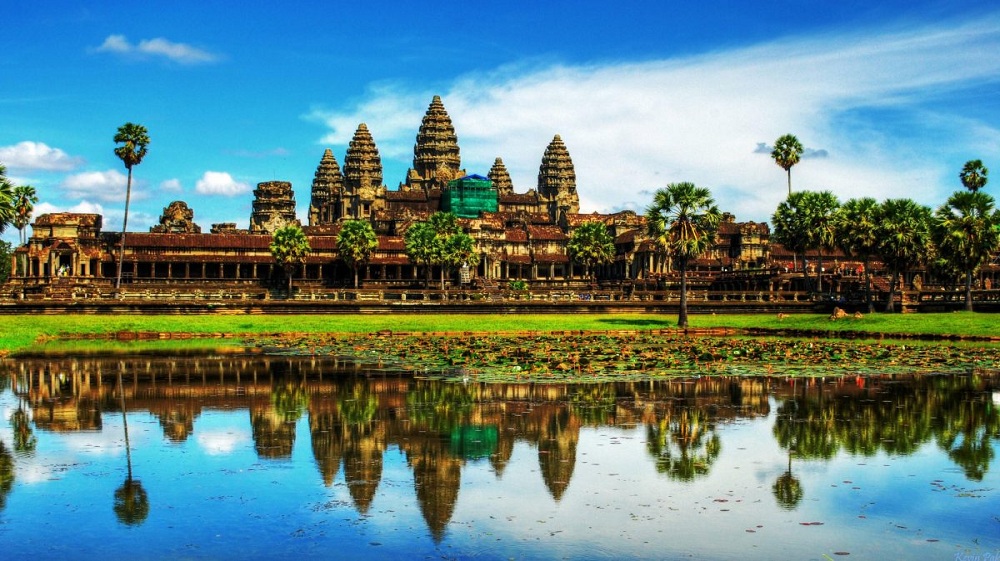 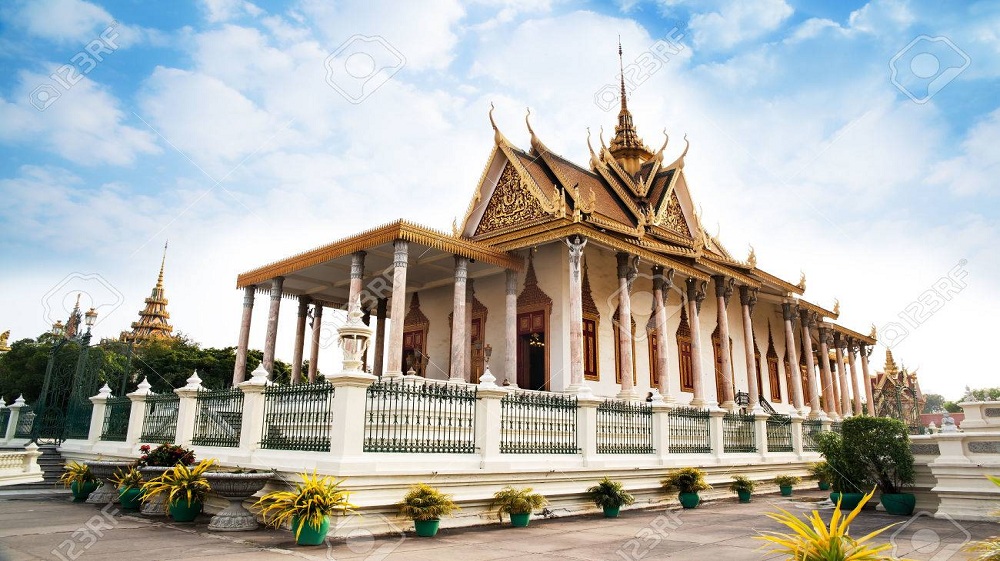 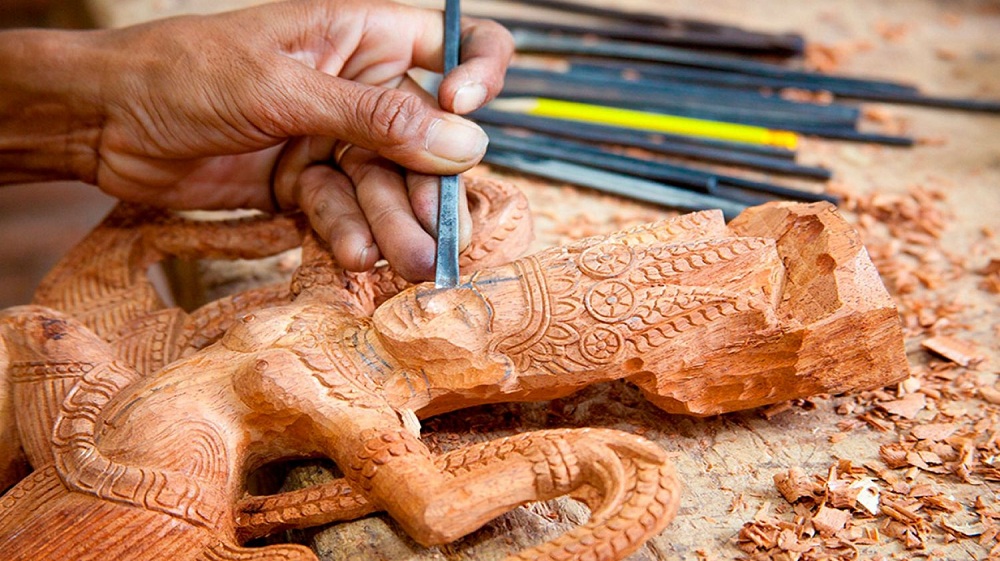 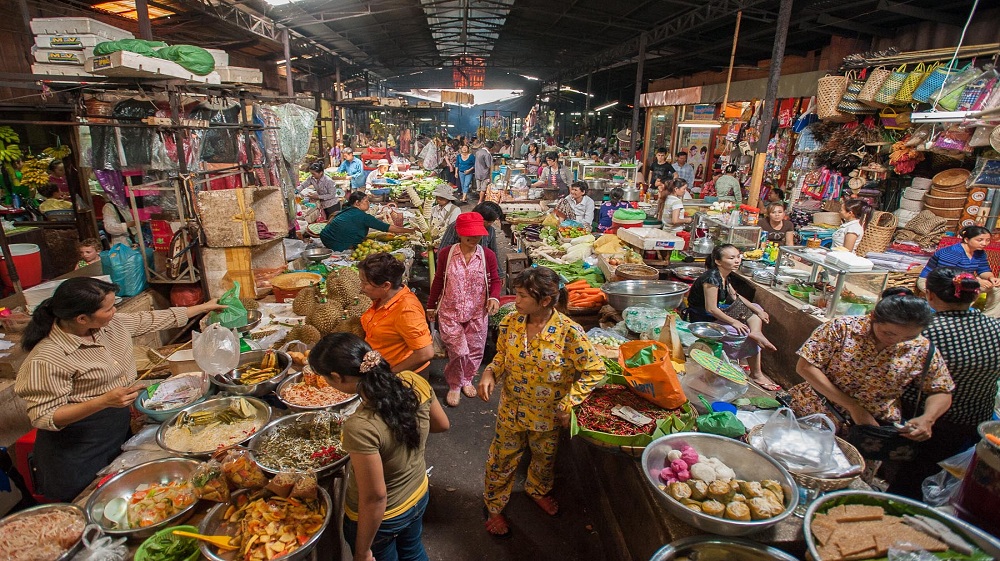